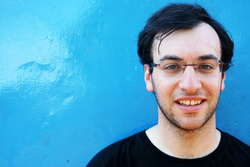 Greg Prisament
I am a software developer living in the S.F. Bay Area, with an eye for design and an entrepreneurial spirit.
Career Highlights

I am currently a Senior Software Engineer working on a project in robotics and machine learning at X. Although many of the details of the project are a secret, you can read about some of what we are doing in this blog post.

In March 2014 I left Ubiquiti and founded Canopy. Canopy is an open source Internet-of-Things platform. Canopy's goal is to let you monitor, control, and share things from anywhere using your smartphone. I believe the Internet of Things, like the World Wide Web, should be based on open source software and royalty-free standards.

Learn more about the project at http://canopy.link.

UBIQUITI NETWORKS
In June 2013 I joined Ubiquiti Networks (NASDAQ: UBNT) as a Product Lead. Ubiquiti is an incredible company -- perhaps the leanest public organization in the technology sector, with highly efficient approaches to engineering, manufacturing, sales, marketing and customer support. Ubiquiti has disrupted the networking equipment market and is paving the way for some cool new technologies.

As a "product lead" at Ubiquiti I wore many hats. On a given day I would find myself doing product design, software architecture, meeting with hardware manufactures, recruiting to grow my team, and planning the product roadmap.

I was a key contributor to the server-side development of PowerCloud's next-generation cloud-based management platform. My contributions included structural changes to the codebase to improve modularity, scalability, and performance. This work culminated in the launch of the highly regarded SkyDog Router on Kickstarter. I designed and implemented several features of the SkyDog router and the framework it is built upon.

In 2010 I won a contract with the Khronos Group, kickstarting my freelance software business. In 2011 I incorporated the business as a California C-Corp under the name Torus Labs, Inc.

Running Torus labs was an incredible learning experience. It was a deep dive into all aspects of starting and maintaining a business. I learned double-entry accounting, California corporate law, business incorporation and maintenence, 1099-MISC hiring, employee management, business development, branding and marketing, and more, on top of actually building software for my clients and working on my own projects.

From 2006-2010 I worked as a software engineer in NVIDIA's Mobile GPU division. I was part of the small team that developed and maintained the graphics drivers for the Tegra brand of SOC (system-on-a-chip) processors. The drivers we built are used in all Tegra, Tegra 2, and Tegra 3-based products, and have shipped in millions of smartphones, tablets, car navigation systems, and pachinko machines.

I primarily worked on the OpenGL ES 2.0 (3D) driver, but also contributed to the EGL (window-system integration), OpenMAX IL (multi-media) and 2D drivers.

I worked with the Khronos Group standards body to develop extensions for integration of OpenMAX IL with OpenGL ES 2.0.

I also worked with Adobe for several months to help GPU-accelerate their mobile flash player.

INSOMNIAC GAMES
During the summers of 2003 and 2004 I worked as a gameplay programming intern. I then joined the company full-time after graduating in 2005.

During my tenure at Insomnaic, I worked on all aspects of gameplay programming for the Ratchet and Clank series and Resistance: Fall of Man. I worked closely with the designers and artists to implement enemies, weapons, environmental breakables, mini-games, help messages, and HUD systems. This job required great attention to detail, so that the experiences were fun and visually exciting.

In total, over 6 million game units have been sold with my work in them.

Princeton was a hugely formative experience for me. It was where I met my wife and many lifelong friends. The CS department turned my interest in computers and programming into a deep understanding of computer science fundamentals and engineering principles.

Of the many classes I took as an undergraduate, the ones that have influenced me most are: Intro to Algorithms, Intro to Signal Processing, Operating Systems, Advanced Computer Graphics, Abstract Algebra, B&W Darkroom Photography, and Moral Philosophy.

PRINCETON UNIVERSITY
Photography
I am an enthusiast photographer with an interest in travel and photojournalism. Below are some of my galleries.